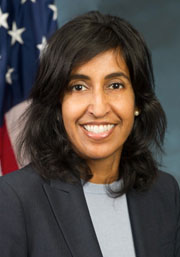 “I am honored to lead such a talented group of people, many of whom I have worked closely with throughout my  career,” said Jayachandran. “I look forward to maintaining the Trust’s impact in the affordable housing world and  expanding our work through new strategies and partnerships.”

Bodaken praised the Board’s choice, saying “I could not be happier for NHT. I have nothing but confidence in handing  the torch to Priya and know NHT will thrive under her leadership.”

Jayachandran is currently Senior Vice President of Affordable Housing Development at Volunteers of America (VOA)  where she creates and implements strategy for affordable housing development, acquisition and recapitalizations as  well as manages the development pipeline and budget.  Prior to her role at VOA, Jayachandran was the Deputy Assistant  Secretary for Multifamily Housing at the U.S. Department of Housing and Urban Development (HUD), managing the  largest department within HUD and some of the Department’s most important programs.

Prior to joining HUD, Priya spent more than 15 years in community development and real estate banking in New York  and Washington, D.C. at both Citi and Bank of America. She also worked for the Inter‐American Development Bank (IDB)  in La Paz, Bolivia as a consultant to women’s microcredit organizations; Credit Suisse as an investment banking analyst;  and California State Treasurer Kathleen Brown as a Capital Fellow. Priya also previously served on the HAND Board of Directors and as a speaker at the 2017 Annual Meeting & Housing Expo Awards Luncheon.

HAND would like to congratulate Priya on her new role and also thank Michael for his service to the industry. We wish them both the best in their next endeavors!

You can read the full announcement here.