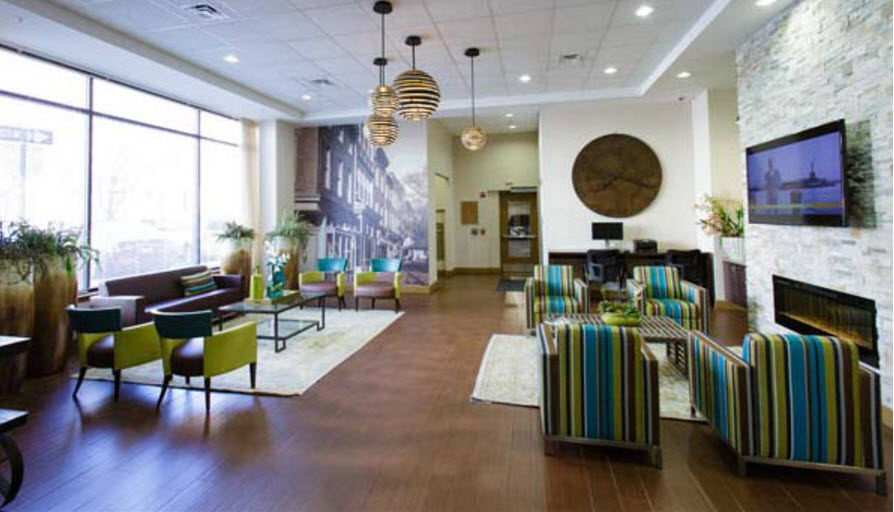 Headquartered in McLean, Virginia, Capital One is a committed community partner located right in our own backyard. With branch locations primarily located in New York, New Jersey, Texas, Louisiana, Maryland, Virginia, and the District of Columbia, Capital one applies the principles of innovation, collaboration and empowerment to its communities across the country. The bank recognizes that housing plays a crucial part in neighborhood revitalization and economic recovery; and in 2015 alone, Capital One provided almost $1.5 billion in affordable housing loans.

Walk into the lobby of the new Fells Point Station in Baltimore and you will be able to see Capital One’s commitment for yourself.

With contemporary gas-burning fireplace a huge flat-screen TV mounted on a stone wall, the area feels more like an upscale hotel lobby than the entrance into a mixed-income community that was once an abandoned police station.

For 19 years, Fells Point Station sat as a bombed-out shell—its roof had collapsed, and the entire building was in danger of crumbling to the ground. Today, the original 16,000-square-foot 1800s brick and masonry building is completely renovated, with a 37,000-square-foot addition joined to it by a glass structure that serves as the lobby entrance. It is the first new construction in this neighborhood—Baltimore’s oldest, and a major shipbuilding center in the 1700s and 1800s—in over 50 years.

A mixed-income, mixed-use building, it exemplifies how reclaiming old buildings can mean turning dilapidation into beauty, while helping the city’s low-income residents. The building houses 47 one- and two-bedroom apartments. There’s free Wi-Fi, a ground-floor retail space, an exercise room, a multipurpose room for residents, an elevated courtyard, and a green roof above 33 enclosed parking spaces. In an up-and-coming neighborhood like this, Fells Point Station was built to stand the test of time and to blend in with other new and renovated properties in the area.

Baltimore native and former commissioner of Baltimore’s Housing and Community Development, Daniel Henson spearheaded the Fells Point Station project – and through his company, The Henson Development Company, partnered with Mission First Housing Group on the development. The two companies had worked together several times before, most notably in the development of affordable senior and family developments in DC Golden Rule Plaza and Severna.

To get the financing started, Capital One provided an $8.44 million construction loan and a $1.85 million permanent loan. Additional funding sources included $9.1 million in LIHTC equity and another $634,000 in funding stemming from the property being a qualified historic rehab project. Both streams of tax benefit were syndicated by Hudson Housing Capital to Capital One as the sole investor. The City of Baltimore and the Maryland Department of Housing and Community Development provided other development funding through subordinate loans. 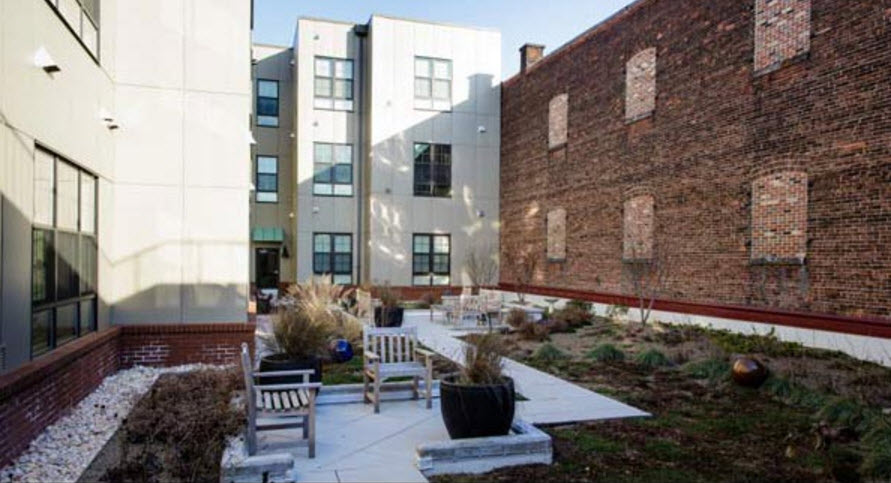 Originally, in 2006, Henson wanted to develop luxury condos on the city-owned site, but then the economy took a nosedive. He quickly discovered that moving toward tiered-income levels helped him qualify for tax credits that could provide needed development capital. Henson, who grew up poor in the Poe Homes nearby, understood what affordable housing could mean to a community. In negotiating with Fells Point community leaders, he learned that the neighborhood liked the idea of making the building 70 percent affordable with the other 30 percent at market rates—bringing a diverse group of new residents into the area.

For one resident, Colin Charon, 53, living at Fells Point Station helped him get his life back on track. Once an assistant to the famous photographer Annie Leibovitz, Charon fell on hard times. While homeless for five years on Baltimore’s streets, he almost drank himself to death due to a one-gallon-a-day vodka habit. He hit rock bottom after a visit to the doctor where he was given a formal letter explaining that if he didn’t stop drinking immediately, death was imminent. That letter now hangs on the wall in his apartment as a constant reminder of just how far he’s come. Sober for over two years now, Charon works as a carpenter and pays just $659 a month in rent—which is half the market rate. He also has a 19-year-old daughter in college.

“When I bring my daughter here,” he says, looking at a photo of his daughter, “it is very important for me to show her that I live in a great place and that I am a good person.”

And for Capital One, being a HAND member means a great deal in helping others like Charon.

“HAND is unique in that it affords its members the opportunity to both derive and provide value from engaged membership,” said Ed Delany, senior vice president and senior capital officer, Community Finance, Capital One. “As an organization that connects, supports, educates and inspires affordable housing professionals and advocates across the region, HAND offers networking, teaching and training opportunities, a platform to share best practices and a forum to discuss issues of importance to our everyday work.”

A 25th Anniversary and 2016 Annual Meeting & Housing Expo sponsor, HAND is pleased to spotlight Capital One as a member who certainly contributes to our organization’s COLLABORATION, INNOVATION and TRANSFORMATION within the metropolitan area!

← Show us your HAND – Share a “We are HAND” video! (previous entry)
(next entry) DCHFA’s Board of Directors Appoints New Agency Leader →
© Copyright Housing Association of Nonprofit Developers (HAND)