The Housing Choices (and Constraints) for Millennials 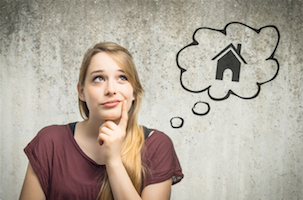 The attention to Millennials housing choices is justifiable. The generation of Millennials—those roughly age 18 to 34—have surpassed the Baby Boomers as the nation’s largest generation and are in prime household formation. Furthermore, surveys of Millennials uniformly find that the vast majority of this population wants to be home owners. For these reasons, Millennials will potentially have an enormous impact on the nation’s housing market.

As we know, however, housing markets are local. The Millennial population in the Washington DC region tends to be more highly educated and have higher incomes than Millennials in other parts of the country. But home prices are also substantially higher in the region than they are in other places. So what are the prospects for home ownership among 20- and 30-somethings in the DC region and how will their choices and the constraints they face impact their ability to accumulate wealth through home ownership?

There are about 1.5 million people between the ages of 18 and 34 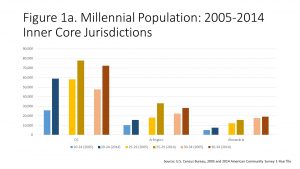 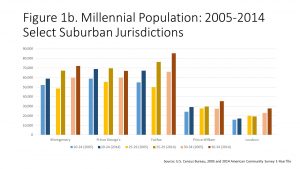 in the Washington DC metropolitan area. The shares of Millennials tend to be higher in closer-in jurisdictions like the District of Columbia (35%) and Arlington County (34%), but Millennials make up substantial shares of the population in the region’s suburbs, for example in Loudoun County (20%) and Montgomery County (21%). The housing choices this group is making now and will make in the future depends on their economic situations and choices about marriage and family, as on the available housing opportunities in the region. These factors combined will determine the extent to which young adult households in the Washington DC region will be longer-term renters than past generations—or will move out of the region where they find more affordable home ownership opportunities.

There are two key decisions individuals make that are relevant to understanding home ownership potential among Millennials—whether or not to form an independent household (measured by headship rates) and whether to rent or buy (tenure choice).
Headship

Headship
Headship rates are defined as the percentage of people that are heads of households. The main way young people become the head of a household is when they move out of their parents’ home. Households are also formed—and therefore headship rates are higher—when roommates that are living together decide to live on their own. Headship rates decline when individuals living alone get married or move in together.

Headship rates for the 25-to-34 year old population were lower in 2014 than in 2005 or 2000. (The focus in this section is on the older Millennial population who are most likely to be looking at home ownership.) Therefore, young adults in the Washington DC region are not forming independent households at the same rate as they did at the height of the housing market or even back during a more “normal” housing market. The biggest decline in headship rates were in Prince William and Prince George’s counties. These are the jurisdictions that were hardest hit by the foreclosure crisis and also tend to have lower household incomes that in other jurisdictions in the region. 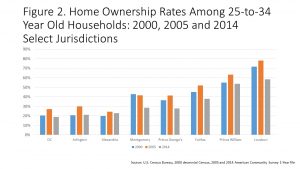 Home ownership rates have fallen pretty substantially since the height of housing market and the declines have been biggest among young adult households. Perhaps, surprisingly, though, home ownership rates have rebounded more quickly in the District and Arlington—places with some of the highest housing costs—than in many other places in the region. For example, the home ownership rate among 25-to-34 year olds in the District was 18.9 percent, lower than the 2005 rate of 27.2 percent but not too much lower than the rate among this age group in 2000. In Arlington County, the home ownership rate was over 30 percent for 25-to-34 year olds in 2005. The 2014 rate of 21.1 percent, however, is in line with the rate in 2000. The biggest drops in home ownership have been in Montgomery and Loudoun counties. One conclusion from these trends may be that home ownership opportunities have rebounded for the highest income Millennials who are able to buy in the District and close-in locations but remain limited for young adults with more modest incomes.

Home Prices
Most young adult households do not earn above the area median income and the vast majority of homes on the market are unaffordable to them. In 2015, the median income for a household headed by someone age 25 to 44 was $92,326. (Data were not available specifically for the 25-to-34 year old population; however, the median household income for this younger cohort will be lower.) Under standard assumptions, a household with an income of about $92,000 could afford to purchase a home priced at about $370,000 (four times income). However, options are few in many parts of the region. In the District, the average sales price of a condo in August 2016 was nearly $520,000 and the average townhouse price in the city was over $740,000! In the broad Suburban Maryland and Northern Virginia regions—which includes Frederick, Charles and Calvert counties in Maryland and areas south to the Fredericksburg area

and west to Fauquier and Clarke counties in Virginia—prices were lower. The average condo in Northern Virginia was about $300,000 and it was about $230,000 in Suburban Maryland. The average townhouse sold for $406,000 in Northern Virginia and $293,000 in Suburban Maryland. But prices were much higher closer in and in areas well connected to jobs, transit, and amenities. For example, in the City of Alexandria, the average two-bedroom townhouse sold for $590,000 in August 2016. In Arlington, the average condo sold for $430,000.

Implications for Millennials—and the Region

There are no easy solutions to increasing home ownership opportunities for Millennials in our region since this particular housing issue is so closely tied to challenges related to student debt, access to credit and wage and employment growth. However, it is important to continue to support the construction of new housing that is affordable to more moderate-income homebuyers, which could mean changing zoning to allow smaller housing units or residential buildings that fill the “missing middle.” In addition, local governments, businesses and advocacy groups can work together to help identify resources for downpayment or other home purchase assistance for first-time homebuyers.