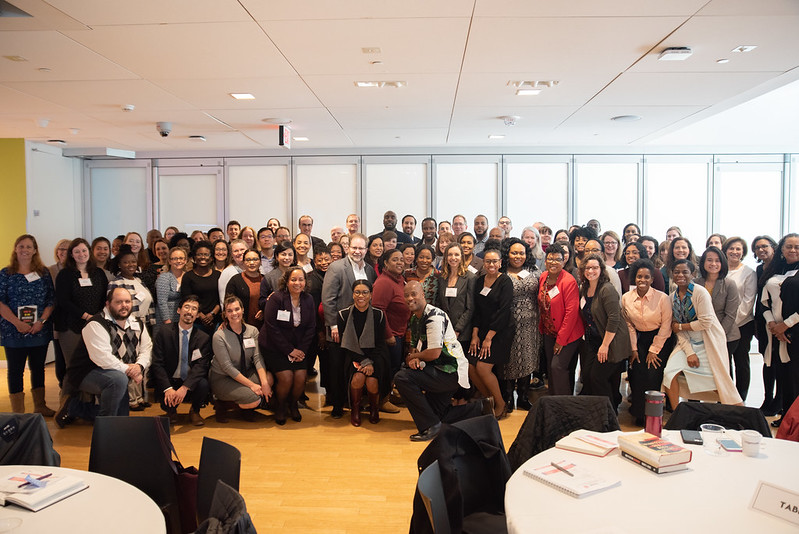 Many thanks to the cohort of 120 members & partners who joined us for the kickoff of Red Lines, White Papers, & Blue Prints: A Four-Part Learning Series Exploring the Dimensions of Racism and Strategies Towards Racial Equity in early March! Hosted at Kaiser Permanente’s Center for Total Health, the first session laid the foundation for the series with the topic of Structural Racism. We were pleased to welcome New York Times Bestselling Author of How to Be An Antiracist, Ibram X. Kendi, as the featured speaker. The powerful program delved into racism in its institutional and structural forms, and challenged cohort members to reflect on how racial equity can play a role in the work of affordable housing and community development.

We asked a few of our cohort members to share their initial reflections from the session:

More on what they had to say can be found below, followed by key moments from the speaker himself.

Thank you to our sponsors, Kaiser Permanente and Wells Fargo! 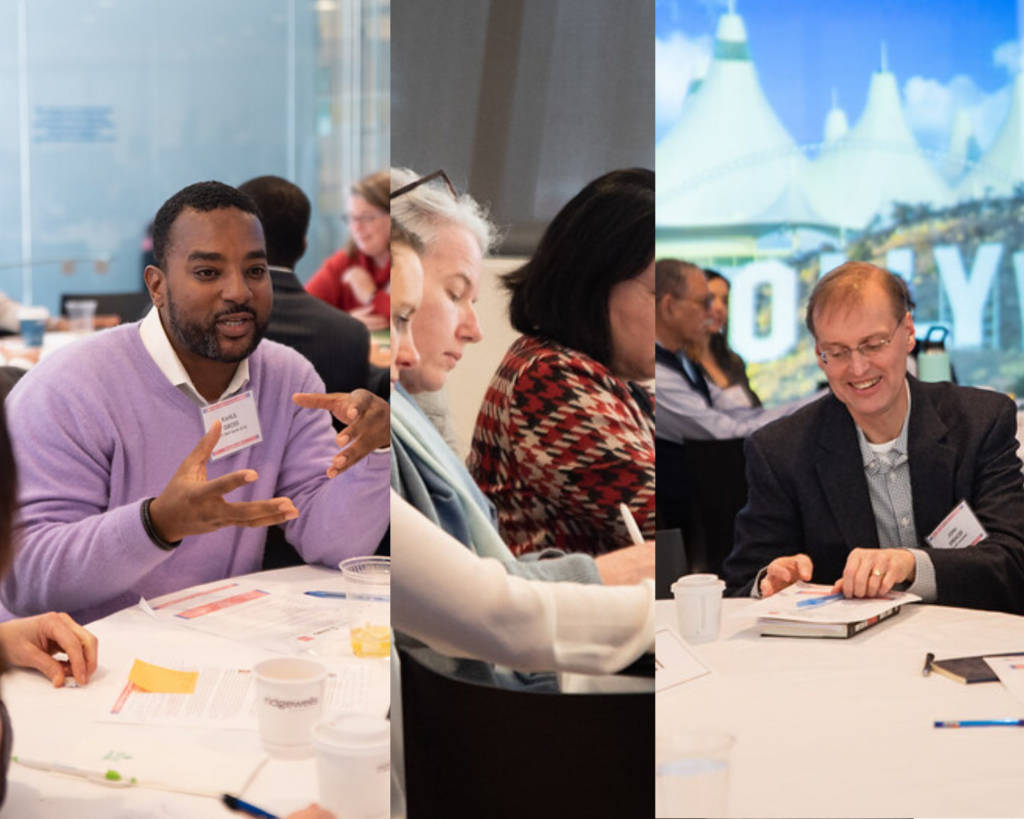 REFLECTIONS FROM THE COHORT

What struck you most about Mr. Kendi’s remarks? 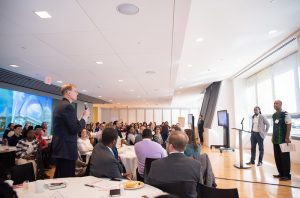 KG: His comment about needing to have hope in order to be a change agent is what has stuck with me the most. Our problems often look very bleak and overwhelming and it feels like people will never change enough to solve the problems we’re facing. Especially when you consider how long we’ve been dealing with them. What also struck me was his knowledge of how these issues present themselves globally. It reaffirms the common denominator I see in most effective change agents and that’s that they eventually approach these issues from a global perspective…or at least understand them from that perspective.

JH: Considering when our actions help an individual in need who may be oppressed by a racist power structure, versus when our actions actually work to change a racist power structure.  Acknowledging that while each of these actions are positive, they are not the same thing. We should not fool ourselves that individual help equates to systemic change.

JS: In some respects, Mr. Kendi’s remarks upset our affordable housing development paradigm by applying a different, and likely new, lens to the work we have been doing for years to preserve and create housing for low- and moderate-income families. While we all know the housing crisis has yet to be solved and is worse now facing new challenges in higher costs, reduced supply, gentrification and income equality, we also could take some pride in our successes along the way. Mr. Kendi’s remarks helped us understand we still have a long way to go and that instilling a racial equity lens in all that we do will truly help individuals, families and communities. To be an antiracist is to be an active participant in achieving racial equity.

If you had to describe how you felt leaving the program in one word, what would it be?

JS: The most appropriate word for me would be “challenged.”  Though preserving and providing affordable housing is already demanding work, it is not enough to go work with the current processes and programs available.  Rather, you need to consider the outcomes of the housing and services you are providing, and if those outcomes are not equitable then you need to change those programs to truly achieve success.

Have you reflected on how structural racism impacts you in your career and other areas of your life? What are your initial observations?

KG: Absolutely.  It became obvious to me in grad school that the driving forces behind the community development industry is the white middle and upper-class establishment.  The solutions that come through the community development industry to address the problems in our neighborhoods don’t get funded or implemented until they understand the problem.  That means that the pace of progress, as it relates to most federal and philanthropic dollars, is always limited by their ability to view us as equal…needing the same systems, advantages and supports that they have.

JH: I’ve thought a lot about the twin concepts of individualization/generalization: When do we (I) observe a behavior by an individual (such as a homeowner) and see that behavior as representative of a group – most commonly a racial group?  When do I see an individual’s behavior as representing simply that individual? When do I benefit from these extrapolations myself?  When do I make them?  How do I hold myself accountable for the uncomfortable truth that I do make them?  And how can I challenge myself and others to see individual behaviors as just that?

JS: You definitely reflect on where you are in your life and that not everything you are or you have achieved is because of your own efforts. Whether it is the home and community you grew up in, the schools and educational opportunities you had, and the career ladder you followed, at some level you know that it was because of structural racism that was prevalent and perpetuated during those times in your life. I’m thankful that the area I’m from, the experiences I’ve had, and the career I chose, gave me opportunities to understand those disparities and try to do something about it. 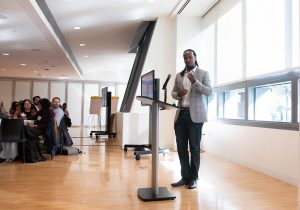 Below are a few of Mr. Kendi’s noteworthy remarks:

“When I think of structural racism, I think of the structure. What I think of is a set of collective policies – and really I define racism itself as a collection of racist policies that lead to racial inequity and are substantiated by racist ideas.”

On the role of self interest in racist policies:

“We’ve been taught this narrative that institutions, individuals push policies because they’re ignorant and hateful – they hate Native people, they hate Asian people, they hate Black people or they’re just ignorant…so what we then need to do is teach them, is get them to start recognizing the human unity and love that persists…it sounds great, but the fact of the matter is what has always been behind structural racism has been self interest, has been economic self interest, has been political self interest, has been cultural self interest, and I think most Americans can understand that during the enslavement era people were enslaving people first and foremost to make money, and that by 1860 this small group of mega slave holders in the south who owned the vast majority of the four million Black people were the richest and most powerful group of people not in the United States, but in the world. Why were they engaged in this racial slavery? To make money – and they made lots of it…We’re still living in times of self interest…Back then it was literacy tests and grandfather clauses and poll taxes. Now it’s voter id laws, now it’s ‘let’s purge voters from voting rolls,’ now it’s ‘let’s cancel forms of early voting,’ now ‘let’s eliminate polling spots in Black and Latinx communities…'”

On the narrative of the American dream hurting Americans:

“…The narrative of the American dream itself, when it became extremely popular…that happened after World War II in the 1950s. What was happening in the 1950s in the sector? That is when you had the suburbanization of America. How did the suburbanization of America happen and who did it hurt? So when we look at for instance, the structure and the set of policies and then who benefitted from it – the actors who were not only critical in the expansion and the building of the suburbs, but the blockbusting of urban areas…the people who were benefitting the most were not black people who were forced, and Latinx people who were forced to stay in these urban centers…”

LEARN MORE ABOUT THE SERIES

CHECK OUT PHOTOS FROM THE FIRST SESSION