On June 11, 2019, HAND welcomed real estate and community development professionals from across the region to its Annual Meeting & Housing Expo – the largest industry convening of its kind within the Capital Region. Themed Holding Ourselves Accountable: Bold Housing Solutions for Every Sector & Every Jurisdiction, this year’s conference was a powerful experience for all in attendance!

Throughout the day speakers and guests explored BOLD approaches to address housing affordability in our communities. The conference kicked off with its Plenary, The Elected Perspective: Bold Housing Solutions Across The Capital Region. This dialogue provided an exclusive opportunity for guests to hear directly from a panel of local elected officials on what steps their jurisdictions are taking specifically to tackle the housing crisis. The Housing Expo was brimming with exhibitors and allowed guests to make valuable connections with HAND members and colleagues. The Awards Luncheon capped the conference, featuring an interactive Fireside Chat, The Industry Perspective: Bold Commitments Across Sectors. Building from the themes discussed at the Plenary, this robust conversation featured leaders from the real estate, healthcare, nonprofit and philanthropic communities – all of whom are implementing BOLD strategies to create housing opportunities for individuals at all income levels. Additional highlights from the luncheon included an exciting performance by all-female Afro-Brazilian percussion band Batalá Washington, an inspiring address from the Children’s Art Contest Grand Prize Winner and the presentation of the Housing Achievement Awards.

Thank you to all of HAND’s sponsors, members, and partners who attended the Annual Meeting & Housing Expo!

The Elected Perspective:
Bold Housing Solutions Across The Capital Region

12:30 PM – 2:00 PM
Awards Luncheon | The luncheon honored our peers and the next generation with the Housing Achievement Awards and Children’s Art Contest. Plus, an esteemed panel delved into BOLD solutions to housing affordability. 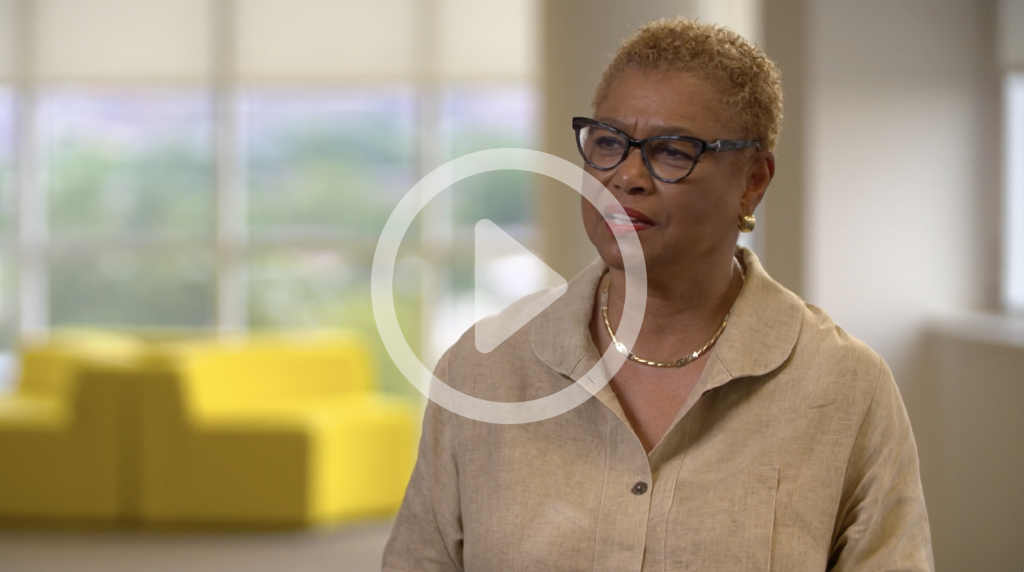 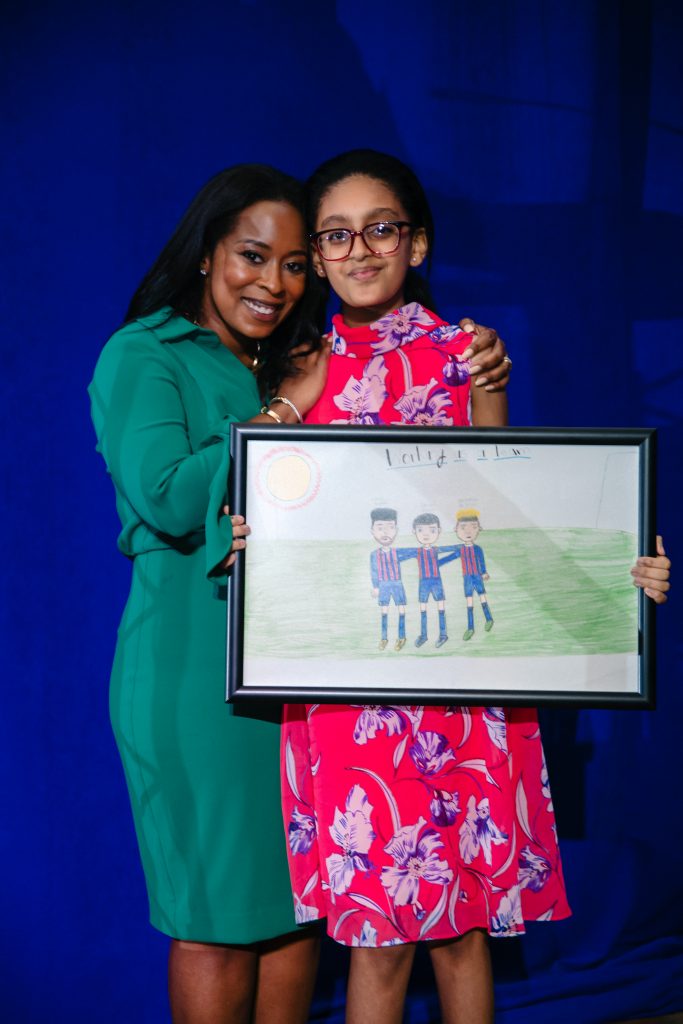 Developer of the Year
Jubilee Housing

Thank you to the 2019
Housing Achievement Awards Judges! 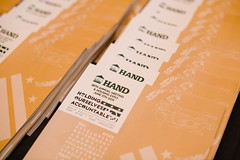 Check out our collection of photos from the Awards Luncheon, Housing Expo and Plenary session! Feel free to download a personal copy of the images and share on social media with the hashtag #HANDAM19.

CHECK OUT THE PRINTED PROGRAM

THANK YOU TO OUR DOOR
PRIZE SPONSORS!

Omni Shoreham Hotel
Weekend Away Certificate with Breakfast for Two

Since David joined Enterprise in 2004, the organization has invested more than $750 million in capital to support affordable housing efforts in the Mid-Atlantic region, preserving or producing more than 10,000 homes. During David’s tenure, the office has been a co-initiator and co-convener of the Greater Washington Housing Leaders Group, initiated several efforts including its Faith-Based Development Initiative, a transit-oriented preservation/resident displacement prevention initiative (GreenPATH) and the D.C. Green Communities Initiative. He currently serves on the board of the Washington Regional Association of Grantmakers, the Northern Virginia Affordable Housing Alliance and The National Low Income Housing Coalition.

In 2004, David completed his service as a program manager for a single-family housing program at the AFL-CIO Housing Investment Trust. Prior to joining the trust, David was a financial and program advisor at the Community Development Financial Institutions (CDFI) Fund. In that position, he developed and managed CDFI’s compliance monitoring review system. Before that, he worked in the office of U.S. Senator Barbara A. Mikulski, at the time the ranking member of the Senate VA- HUD Appropriations Committee. David served as the senator’s senior legislative assistant, responsible for analyzing and providing  policy  recommendations  on  legislation  pending  before  various  appropriations  subcommittees.

David earned his bachelor’s degree from the University of Virginia and his Master of Divinity degree from Howard University. He is an ordained minister and the founder of the all-volunteer NO MURDERS DC movement, launched in 2000. From 2013-2015 David served as the mayoral appointee as chairman of the District of Columbia Housing Production Trust Fund Advisory Board. David is a founding member of the Greater Washington chapter of 100 Black Men and a member of Leadership Greater Washington (’09). David formerly served on the boards of Thrive DC, City First Enterprises, City First Homes and Jubilee Housing. He is a former member of the District of Columbia’s Board of Real Property Assessments and Appeals and the District of Columbia’s Juvenile Justice Advisory Group.

AJ Jackson serves as the Executive Vice President, Social Impact Investing, of JBG SMITH where he leads the Washington Housing Initiative and manages the Impact Pool, an investment vehicle that provides secondary financing for affordable workforce housing. Prior to joining JBG SMITH, Mr. Jackson was a partner with EYA, a Washington, DC-based urban infill development company. At EYA, he led EYA’s participation in more than $1B of double and triple bottom line social impact projects.

Mr. Jackson has extensive experience in the creation of programs and policies supporting mixed-income housing. He played a key role in the creation of a nationally recognized workforce housing program and was called upon to advise local governments, public institutions, and the National Association of Homebuilders on mixed-income housing policy.
Mr. Jackson is an active member of ULI, serving as a Global Governing Trustee, and formerly as Chairman of the Public Private Partnership Council. He holds a LEED Green Associate credential from the US Green Building Council and is a member of the African-American Real Estate Professionals Association. Mr. Jackson received a B.A. with honors from the University of Alabama and an M.B.A. with distinction from Harvard Business School.

Celeste’s career spans 30 years in the health and media industry, including leading corporate communications for USA TODAY/Gannett Co., Inc., U.S. News & World Report magazine, and NPR (National Public Radio).  Celeste also serves as a Commissioner on the Maryland State Governor’s Community Health Resources Commission, and as co-chair of Washington Regional Food Funders, a collaborative of funders dedicated to improving our regional food system, and a Board Member of Crittenton Services of Greater Washington, supporting girls in DC and Montgomery County, Maryland Public Schools. Celeste is a graduate of Cleveland State University.  She relaxes with great cuisine, music and laughter.

Jim Knight has spent his career working at non-profit organizations that welcome and support families and individuals who have experienced difficult circumstances, often related to economic hardship. In acute situations, these hardships include homelessness, addiction, and incarceration. He has led Jubilee Housing as its executive director since 2002.

Knight started his tenure modernizing Jubilee’s original properties. More recently he has been expanding Jubilee’s stock of highly affordable homes, adding to the organization’s key initiatives, and advancing its mission.

Under Knight’s leadership, Jubilee has preserved approximately 235 affordable homes in the now high-cost neighborhoods of Adams Morgan, Columbia Heights, and Mount Pleasant—enabling long-time residents to remain in place and benefit from the positive change in their communities. In Fall 2018, Jubilee will open an additional 64 affordable homes in Columbia Heights. With Knight’s guidance, Jubilee also has expanded programming to help residents reach their life goals. This includes programming in early childhood education, out-of-school-time youth development, and supportive services for returning citizens.

He spearheaded Jubilee’s most recent innovation, a strategic alliance with six other high-impact non-profits working to increase the ability of D.C. families to overcome economic hardship. Working with organizations in the Platform of Hope, families pursue their goals in a supportive cohort.

Knight directs Jubilee in its broadened mission to foster equity and bring about justice through housing—justice housing, which is affordable to those with few financial assets, coupled with opportunities we all need to succeed, and located in resource-rich neighborhoods. He spearheads Jubilee’s efforts both to establish more justice housing and to foster better understanding among people from different backgrounds and experiences through justice housing.

Prior to accepting the executive director role at Jubilee, Knight led the men’s transitional program at Samaritan Inns, where he helped open a new facility that doubled the organization’s capacity to serve men in the early stages of recovery. Knight oversaw a staff of addiction counselors and social service coordinators and worked directly with residents as they took steps to rebuild their lives.

Earlier, Knight served as a facilities manager and work rehabilitation coordinator for the Knox Area Rescue Ministries, a nonprofit assisting the homeless community in Knoxville, TN. Knight began his career in 1994, as an intern with the Festival Center, a mission of the Church of the Savior in Washington, D.C. The Festival Center placed him at Jubilee Housing.

Knight is a mayoral appointee to D.C.’s Housing Production Trust Fund Advisory Board, offering insights into the strategic development of affordable homes in the District. He is also a member of the Leadership Greater Washington Class of 2019.

Knight received his BA from the University of North Carolina at Greensboro.

He is a member of the Bread of Life Church, a faith community that grew out of the Church of the Saviour, and he describes his career path as driven by his faith.

Knight and his family are long-time D.C. residents. His wife co-owns a veterinary practice in the District, and their children attend D.C. public schools.

Bruce McNamer is the President and CEO of Greater Washington Community Foundation, a tax-exempt public charity that is dedicated to improving the Greater Washington region – by connecting caring people to causes that matter. The Community Foundation, which serves the District of Columbia; Montgomery County; Prince George’s County; and Northern Virginia, currently manages more than 700 donor funds with assets totaling more than $350 million. The Foundation is the largest local funder of nonprofit organizations in the region,and is one of the larger foundations of its kind in the United States.

Bruce joined The Community Foundation in 2015, bringing broad experience in the public, private, and philanthropic sectors. Just prior to joining, he was the Head of Global Philanthropy and Chief Executive Officer of the JPMorgan Chase Foundation.  Prior to JP Morgan, he served as the President and CEO of TechnoServe, a nonprofit organization that works with people in the developing world to build competitive farms, businesses and industries – with operations in 30 countries in Africa, Latin America and India.  Before joining TechnoServe, Bruce was a senior executive/founder in technology start–ups, an investment banker at Morgan Stanley and a management consultant at McKinsey & Company.  Bruce was also a White House Fellow at the National Economic Council and a Peace Corps Volunteer in Paraguay.  Bruce serves on the board of trustees for several local and international nonprofits, including PATH, MasterCard Foundation and the Federal City Council. He has an AB from Harvard and a JD/MBA from Stanford.  He is a member of the Council on Foreign Relations, and a Montana native.