Local providers of affordable housing and services respond to the needs of their local communities and operate within local market conditions. While local funding and programs, and innovation in the public and private sectors have become increasingly important for expanding access to affordable, federal budget and program decisions set the overall landscape in which housing providers in the greater Washington DC area can serve lower-income individuals and families.  Below are five federal policy efforts to watch. 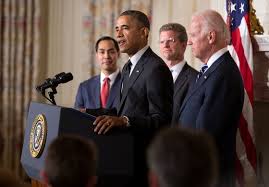 The President’s FY 2016 proposed budget includes $49.311 billion for HUD, which represents an 8.7 percent increase over HUD’s FY 2015 budget.  The vast majority—84 percent of HUD’s total  budget—goes toward supporting existing rental assistance programs to ensure that the current number of households served by the programs can continue to be served. This includes funding for the Housing Choice Voucher program, public housing, project-based rental assistance and homelessness programs.  Only 16 percent of HUD’s budget is therefore available for new or expanded programs including, importantly, CDBG and HOME, as well as housing counseling programs, fair housing enforcement, section 202 and 811, among others.

Laura Hoghead, Deputy Chief of Staff for Budget and Policy at HUD recently outlined the department’s funding and policy priorities. In addition to restoring the tens of thousands of  vouchers lost as a result of sequestration, the FY2016 budget proposes increasing tenant-based rental assistant to reach 2.4 million households and expanding  access to vouchers for homeless families, veterans, and victims of domestic violence. The proposed budget includes additional resources for the public housing capital and operating funds, and authorizes expansion of the Rental Assistance Demonstration (RAD) program (see below). The budget includes increased resources for Homeless Assistance grants, rapid re-housing interventions, housing counseling programs, and the Jobs-Plus program.

The restoration of the housing vouchers that were cut during sequestration along with modest increases in selected HUD programs are important elements of HUD’s FY 2016 budget; however, the overall budgeting process reveals just how limited the federal government’s reach is in expanding resources for affordable housing.  Nationally, only one in four households eligible for federal housing assistance receives it, and given the current budget environment, it is extremely unlikely that the federal government will expand its reach to meet more in need.

The Housing Trust Fund (HTF) was established as part of the Housing and Economic Recovery Act of 2008 and was set up to be funded through proceeds from transactions made by Fannie Mae and Freddie Mac (the GSEs). When Fannie and Freddie were taken into conservatorship by the Federal Housing Finance Administration in September 2008, their obligations to set aside funds for the HTF were deferred.  FHA Director Mel Watt lifted that suspension in December 2014 and on January 1, 2015, the GSEs started setting aside an amount equal to 4.2 basis points of each dollar of unpaid balance of total new business purchases. Sixty-five percent of this amount will support the HTF and the other 35% will support the Capital Magnet Fund (see below).

In 2015, states must develop an HTF Allocation Plan and designate an entity to administer the HTF program.  In the greater Washington DC region, only Virginia has formally authorized an agency—the Virginia Department of Housing and Community Development—to administer and allocate HTF funds.  Each state will receive funding based on the needs outlined in its allocation plan, with a minimum of $3 million available to each state.  Initial funds available from the HTF are anticipated to be between $300 and $500 million.

Thirty-five percent of the dedicated funding from the GSEs will go to the Capital Magnet Fund (CMT).  The CMT is administered by the Treasury Department’s Community Development Financial Institutions (CDFI) Fund and provides grants to CDFIs and nonprofit housing organizations through a competition. The funds can be used to finance affordable housing activities, as well as related economic development activities and community service facilities.

The competitive process aims to spread awards out in communities across the county.  Grantees are required to leverage their award by at least 10 times the grant amount. There was a round of funding allocated from the CMT in 2010; however, there were no awards made in the District of Columbia, Virginia or Maryland during that round. A new awards process has not yet been announced but organizations should look for news over the coming year.

Authorized under the Consolidated and Further Continuing Appropriations Act of 2012, the RAD program was designed to address the loss of public housing and to help meet the backlog of capital needs among many public housing projects. The RAD program allows a set of public housing and moderate rehabilitation properties to convert to long-term Section 8 rental assistance contracts and to leverage public and private debt and equity to reinvest in and rehabilitate the properties. These contracts are legally obligated to be renewed, which will ensure that the units remain affordable over the long-term.  Residents retain the same rights they had under the public housing program and continue to pay 30% of their income in rent. Under its current format, the RAD program is intended to be cost-neutral, meaning it does not increase HUD’s budget but rather shifts units from the public housing program to the Section 8 program.

Initially, the competitive RAD program was limited to 60,000 units, although HUD received applications that far exceeded the 60,000 cap.  In December 2014, the cap on units eligible for RAD was lifted to 185,000; however, the obligation for a revenue neutral process was retained.

Locally, Baltimore and Montgomery County have received authorization from HUD to redevelop public housing under the RAD program.  Housing authorities in other high-cost markets, including Cambridge, Massachusetts are also using RAD to invest in their public housing developments.  Several housing and public policy organizations have advocated for further expansion and flexibility of the RAD program. However, the pilot program is currently being evaluated and there remains uncertainty about the long-term viability of the program and the impact on existing and future residents.

The Senate Finance Committee has been debating possible tax reform legislation, which includes discussion of the future of the LIHTC.   The LIHTC is the nation’s largest and most successful rental housing production tool, producing approximately 100,000 affordable homes each year and helping to finance more than 2.7 million affordable homes throughout the program’s 28-year history.  The availability of tax credits is critical to the development and preservation of affordable housing in the greater Washington DC region and in communities around the country.

The Affordable Housing A.C.T.I.O.N. campaign, a broad-based coalition of national, state and local organizations, is advocating for the preservation and expansion of the LIHTC program.  Specifically, there are efforts to 1) to make the 9% credit fixed floor rate permanent, and 2) to make the credit floor rate for acquisition fixed at no less than 4 percent, to provide less variability to credit pricing.  At this point, it is not clear that any action on tax reform is imminent, although education and advocacy efforts are ramping up.